Concerns derived from a 2014's fractious and divisive budget season centered on a (San Francisco) City-wide battle for cultural equity to issues around the Bay Area's real estate market and its repercussion on affordable housing and creative spaces, founders Lex Leifheit, previous Executive Director of SOMArts and Ebony McKinney, formerly of Emerging Arts Professionals took action to help stitch the community back together. They conducted interviews with dozens of arts leaders and representatives and city departments. They discovered a critical interest and readiness for collaboration and action around issues facing the arts community. Holding their first ABBA meeting in January 2015, close to 100 attended to learn, participate and share information. With the timing right, this community gathering decided that ABBA would be the perfect collective to advocate for an arts-focused budget with City Hall as an action that could be acted on immediately.

Derived from the first ABBA meetings of early 2015, a volunteer group of arts and community representatives worked in collaboration between January-May 2015 developing and recommending funding increases to San Francisco’s arts and culture budget. The allocations included a recommended increase of $8M and funding in the areas of access to public and private space, artists and workforce, cultural equity, vibrant neighborhoods and public art, and youth opportunity. All funding recommendations were shared and informed through a community-based process guided by ABBA.

On May 29th, 2015 the Mayor’s Office announced a $7 million shared prosperity package to support the arts over two years. An additional $2 million was directed to the arts by Board of Supervisors add-backs. Funds were allocated to the San Francisco Arts Commission and Grants for the Arts programs. The 2015/16 budget increase for arts and culture was the first sign of increased allocations to the City’s budget in decades – an unprecedented amount of teamwork, cross-collaboration, and community-wide support made it a reality. More details can be found here, and here from a press release.

In early 2016, the ABBA founders and a selection of arts leaders and former Budget Coalition members met to reflect on the success of the previous year and to envision what an organization like ABBA could be and facilitate with the arts community. From the meeting, a number of individuals decided to volunteer as ABBA Stewards and develop a Committee structure focused on different areas of concern in the community. Committee lead topics concentrated around real estate/cultural space preservation for housing, organizations and art creation; building public will, grass-roots arts advocacy; arts budget (City budgeting); communications and branding; and, operations.

In mid-2016 many ABBA members and Stewards joined a coalition working to develop, petition and campaign for a proposition for November’s ballot. Its focus was to guarantee and increase resources to arts and culture and programs and organizations working to end family homelessness and help families. The message for the proposition (Proposition S) was simple. Stronger funding for these communities will aid in city health and vibrancy – and keep San Francisco, San Francisco. This unique cross-sector partnership and work of 2016 among San Francisco organizations and individuals was nearly successful. The proposition just missed the mark by only 3% but built a strong coalition of individuals and groups with a common purpose and values to consider future strategies.

ABBA officially endorsed the legislation and partnered with the coalition to help inform and educate the public about the details of the proposition through events, various communications, and support efforts. The Stewards continue to connect and stay abreast of the coalition’s efforts and plans. 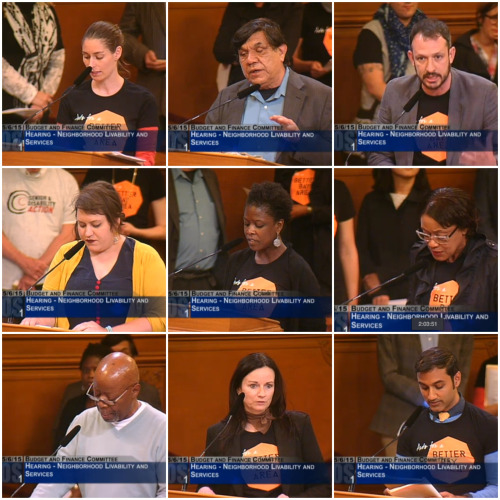