With considerable backing from City Hall, including Mayor London Breed, this ballot measure restores funding for the arts and culture communities of San Francisco without raising any new taxes through allocations tied to a portion of the projected increase of the Hotel Tax.

San Francisco’s arts and culture communities drive billions of dollars of tourist spending into the City’s budget, helping to generate funding for infrastructure, education, and community safety. They also help develop our communities, including youth and underserved communities, as well as our well-known museums and performance arts. This measure will secure funding to arts and culture to benefit all San Franciscans.

“I learned to play the flute for 7 years when I was in public school growing up here in San Francisco,” said Supervisor Tang, one of the cosponsors of the measure. “I am so thankful for that rich experience because my family probably couldn’t have afforded my flute lessons otherwise. I was able to benefit from that experience, which included even performing at Carnegie Hall in high school, and I hope that many other students will be able to grow up with even more opportunities because of this measure.”

Over 70 organizations have come together to work alongside Supervisor Tang, Supervisor Peskin, the Controller’s Office, the City Administrator’s Office, Grants for the Arts, and the San Francisco Arts Commission to put together an extensive piece of legislation. If passed, the measure would significantly increase funding to Grants for the Arts and the Arts Commission, establish the Arts Impact Endowment, and increase funding for Cultural Centers and Cultural Districts to ensure arts and culture programs in San Francisco receive the type of dedicated funding they were once allocated.

Supervisor Peskin, another cosponsor, echoed that, “This has been an extraordinary collaboration between Supervisor Tang’s office, my office, and the amazing arts and culture coalition that originally formed in 2016 who have spearheaded this work that we are celebrating today. We are going to engage SF voters and make sure everyone knows this won’t raise any taxes, while running a robust and fun campaign.”

The Hotel Tax, originating in 1961, tied arts funding to tourism revenue because of the symbiotic relationship between the two. However, the connection has been severed over the years, bringing a decline in necessary funding for the arts and culture communities. This measure aims to restore the pioneering legislation and secure funding for arts and culture organizations in San Francisco that have seen their budgets decrease significantly in the last several years. 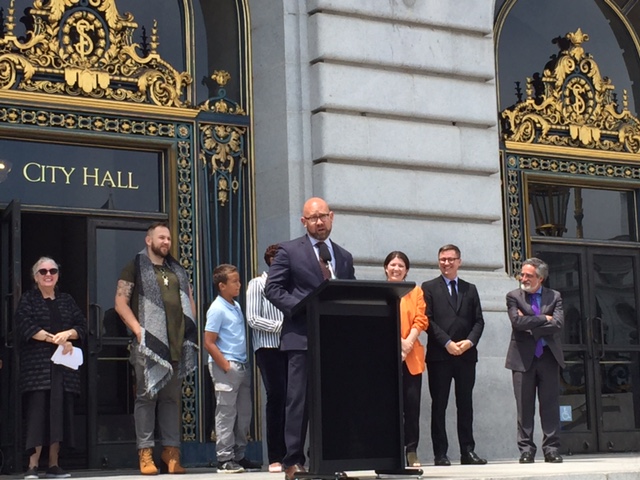 “It is important to protect and restore funding for non-profit cultural institutions, community Cultural Centers, neighborhood arts, and Cultural Districts,” reflects Rachel Lastimosa, the Arts and Culture Administrator at SOMA Pilipinas. “The housing crisis and the affordability challenges that we face here in San Francisco mean that we are losing the lifeblood of cultural bearers and artists that make San Francisco the community we love.”

The Hotel Tax Allocations Initiative aims to secure funding for large and small arts organizations, arts education programs, individual artists, Cultural Centers, and Cultural Districts in San Francisco. The funding will be based on the estimated growth of the Hotel Tax, which will not affect any other city service programs or impact San Francisco voters. There has been groundbreaking unity and collaboration throughout this process, and with the full backing of City Hall, and more support for this measure expected to grow in the coming weeks, the Coalition is stronger than ever and in the best position yet to win in November.

Kary Schulman, Director of San Francisco Grants for the Arts, underlines the importance of this measure, noting that, “The coalition of arts groups that have come together across all disciplines, across all neighborhoods in the city, and across all cultures, to help create this ballot measure is absolutely unprecedented, and reflects this city’s best values.”