On Tuesday March 21st, in conjunction with the National Arts Advocacy Day (Americans for the Arts), Oakland artists and advocates are launching a campaign to implore Oakland City Council members and Mayor Schaaf to take a real stand for development without displacement by investing in arts as a cultural preservation strategy, starting with $3 million to increase the Cultural Funding Program (keeping artists creating, working, teaching in Oakland) and to develop a deep community leadership process for the 2017 Citywide Cultural Plan.

Community-led cultural preservation across Oakland’s neighborhoods requires an investment by City leaders and businesses; we all know that arts and cultural experiences and enterprises anchor our vibrant city ecosystem and is part of the soul and history of Oakland.

As the cost of living and doing business have skyrocketed; as the City’s support for development Downtown has expanded;  as elders, families, and people of color are displaced from the city at alarming rates; so are a cross-section of artists, arts workers, and culture bearers being driven out of the city that has fueled their creative flame. Artists, arts enterprises and non-profit arts organizations are struggling to remain here. We need to be able to say “Stayed in Oakland” not just “Made in Oakland.”  We are all challenged to keep the arts affordable and accessible to everyone.

We envision art and culture leading community development pathways towards a healthy, equitable, diverse and vibrant city….we see steps towards this vision through community-led organizing for the Chinatown Improvement Initiative, Black Arts Movement Business District, Black Culture Zone, the Art and Garage District, and others.

WHAT YOU CAN DO TODAY:

WHEN – #ArtsDayOakland launches Tuesday March 21st and the Thunderclap message is released Friday, March 31, 2017 @8:45am

What is Thunderclap? - Thunderclap is the first-ever crowdspeaking platform that helps people be heard by saying something together, ALL AT ONCE. It allows a single message to be mass-shared, flash mob-style, so it rises above the noise of your social networks. More here:FAQ

A Local take on #NationalArtsAvocacyDay:

Art is not a luxury, it’s a necessity.  Art and Culture are the hallmarks of a strong and flourishing civilization.  The arts have the ability and the inherent power to create space for the reflection, reinvigoration, and revitalization of an individual, a place, a community or a nation.  The arts are an economic driver that enhances tourism, creates jobs and adds to the vibrancy and livity of public places, by creating spaces of civic engagement, and discourse.  Art should not be restricted by barriers to the means of production, nor should the public be without access to diverse, robust, quality driven art that is reflective of the communities, histories, and lived realities from which it arises.  Artisans should not be made cultural refugees as an effect of rapid development, rather artisans should be valued as being central to placemaking; not viewed as “assets” to be managed, plug and play, or inter-changeable game pieces, but rather as integral parts of communities, cities and this nation’s dream of itself.

On March 21st, Americans for the Arts will bring together 85 national arts organizations & over 500 grassroots arts advocates to visit their Congressmembers in D.C. to develop strong public policies investing in the creative cultural life of our cities, focusing on saving support for the National Endowment for the Arts this year.

Celebration of Oakland arts and culture, and the people who create them. 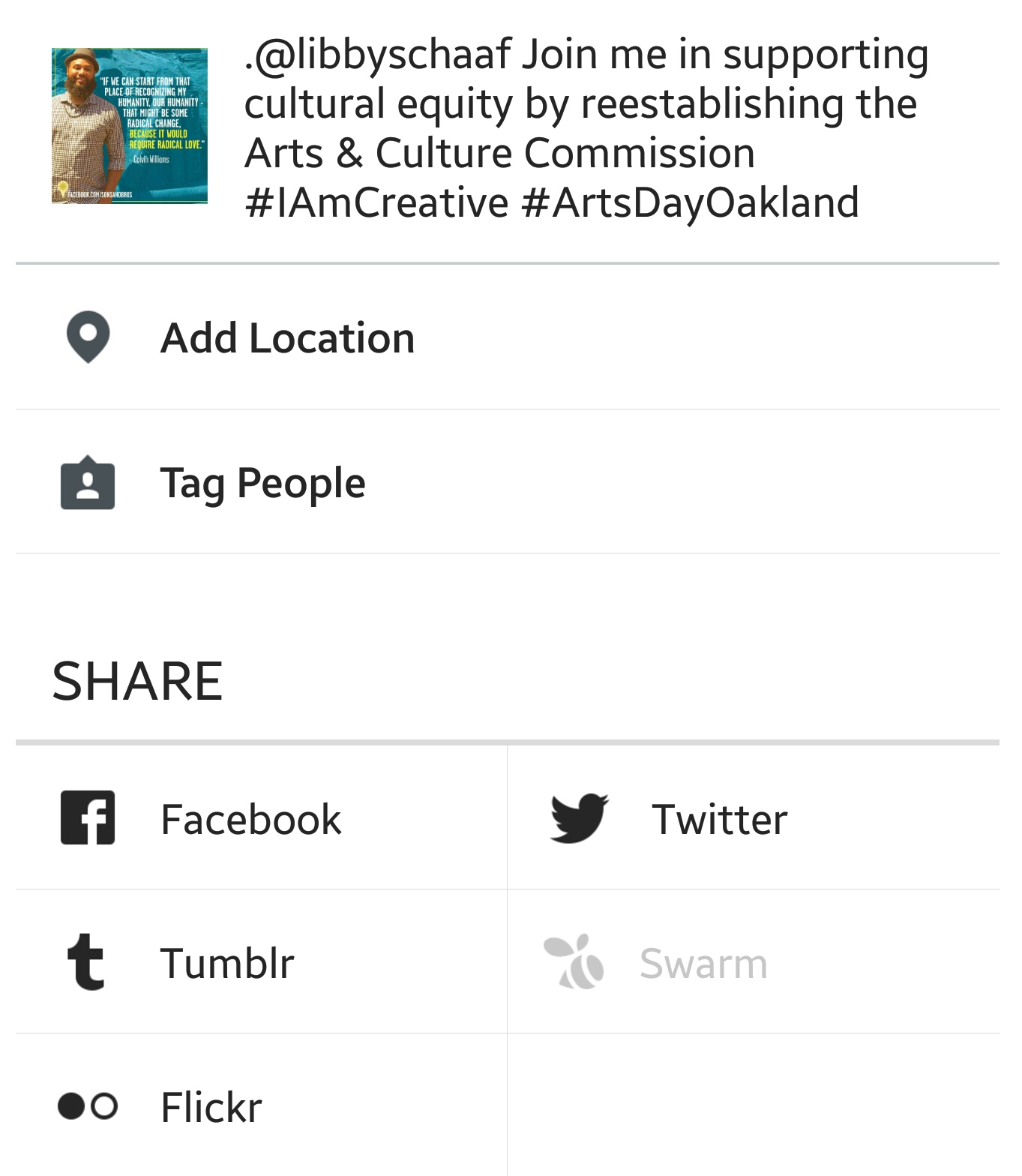